WORKING RANCH HISTORY AND TRADITIONS OF THE PAST

If you are interested in the working ranch history, you have come to the right place. Contrary to popular belief, long-distance cattle driving was traditional not only in Texas but elsewhere in North America long before anyone dreamed of the Chisholm Trail. The Spaniards, who established the ranching industry in the New World, drove herds northward from Mexico as far back as 1540. In the eighteenth and nineteenth centuries, Spanish settlements in Texas derived most of their meager revenue from contraband trade of horses and cattle driven into Louisiana. In the United States, herds of cattle, horses, and pigs were sometimes driven long distances as well. In 1790 the boy Davy Crockett helped drive “a large stock of cattle” four hundred miles, from Tennessee into Virginia. In 1815 Timothy Flint “encountered a drove of more than 1,000 cattle and swine” being driven from the interior of Ohio to Philadelphia.

During the Civil War, Texans drove cattle throughout the South for the Confederate forces. At the close of the war Texas had some 5 million cattle—and no market for them. In 1866 there were many drives northward without a definite destination and without much financial success. These drives included Colorado, Nebraska, Wyoming, and Montana. Texas cattle were also driven to the old, but limited, New Orleans market.

During the 1870s the buffalo were virtually exterminated, and the American Indians of the Great Plains and the Rocky Mountains were subjugated. Vast areas were left vacant. They were first occupied by Texas longhorns, driven by Texas cowboys. The Long Trail extended as far as Canada. 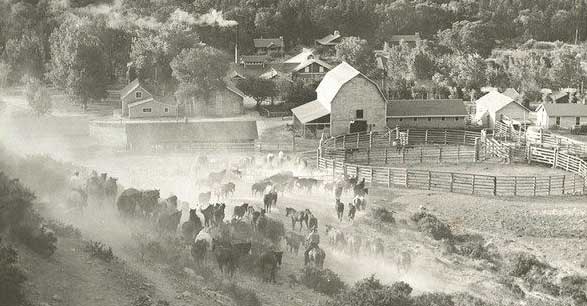 In the 1890s, herds were still driven from the Panhandle of Texas to Montana, but by 1895 trail driving had virtually ended because of barbed wire, railroads, and settlement. During three swift decades it had moved more than 10 million head of cattle and 1 million range horses, stamped the entire West with its character, given economic prestige and personality to Texas, made the longhorn the most historic brute in bovine history, and glorified the cowboy throughout the globe.

As indicated in the previous paragraph, barbed wire had a lot to do with the end of traditional cattle drives. With barbed wire, ranches sprung up. These cattle ranches are the ones you see today, as ‘working cattle ranches’. These working ranches grow, develop, drive, and sell their cattle to market, just like the cattle drives of the past, with the only difference being the ranch and a fixed location.