To Create the Next Generation of Givers
Our mission is to design opportunities for others to make a difference in the lives and communities around them. We’re especially passionate about creating ways for parents to teach their children about giving, hoping to make charity and volunteering a natural part of their lives. We are KidsGiving365

Our Vision:
We exist to Create the Next Generation of Givers, especially in children. We strive to make a significant difference in the lives and communities of others. 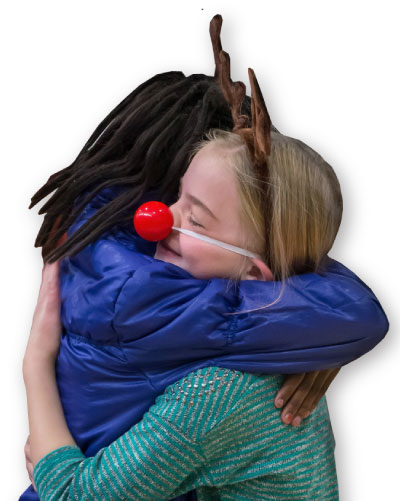 Key Milestones to-date: Back to School Pilot, Established an Advisory Board

Meet the mom’s who started the Santa’s Elves program by watching The Story of Santa’s Elves, then read more about us below.

Santa’s Elves started in 2010 when Deborah Sherman, then Chief Investigative Reporter at 9NEWS, was trying to teach her 4-year-old son Jack about the value of giving instead of receiving gifts at Christmas time. But she couldn’t find any charities that would allow children his age to get involved.

So Deborah came up with an idea to have Jack hand-deliver a gift to a child who would really appreciate it. After some research, Deborah found many underserved children who needed help living in Sun Valley, which is the poorest and most neglected area in the entire state.

She told her friends Jennifer Ramirez and Stella Castro about the great need there, and they jumped in to help. Their charity became Santa’s Elves – Kids Giving to Kids.

That Christmas day, the moms, other parents and their little elves went door-to-door delivering 200 gifts to children in the Denver projects. One father with tears in his eyes fell to his knees and kissed the presents. “This is all I have for my children. Thank you.”

Every year since, Santa’s Elves’ capability and reach has allowed us to meet more of the need in Sun Valley and Denver Housing Authority neighborhoods. In 2014, Santa’s Elves matched 250 giving families with 1,305 children living below the poverty line. In 2015, we helped more than 2,000 children!

We work closely year-round with the Denver Housing Authority and James Salinas, Supervisor of the Rude Recreation Center, to identify children most in need.